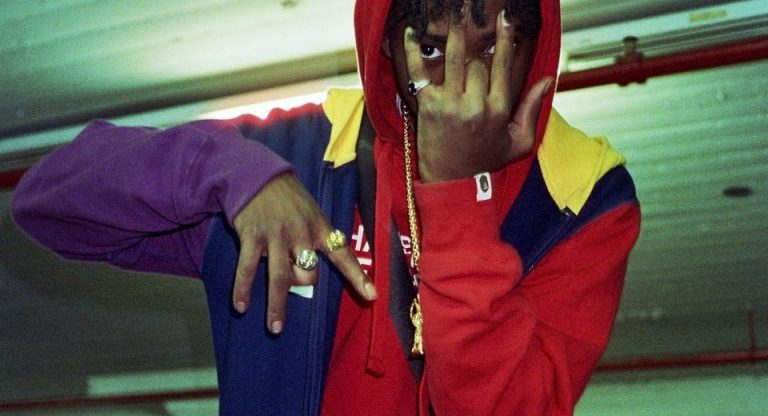 Before changing how a wave of rappers rapped, before dropping his SoundCloud classic Underdog at the age of 16, before walking in smelly traps and remixing Spongebob songs and mesmerizing every online teenager with an ear to the orange, Duwap Kaine was a literal child who rapped under the name DolphinGod. Now, thanks to some internet wizardry, an artifact from that aquatic era has resurfaced. A few weeks ago, Twitter user icedanceremily unearthed the deleted 2013 DolphinGod tape Who Is Dolphingod ? off Datpiff using a method that I neither understand nor want to reveal publicly. Duwap Kaine was 10, verging on 11, when he released this.

Now I normally wouldn’t put much stock in the music that one of my favs made when they were a kid, but Kaine is an exception because so much of his best work comes from before he could register to vote. Keep in mind that Kaine (as DolphinGod) recorded one of his most well-known songs “Elmo Freestyle” when he was 9.

But unlike that track, which went viral off being practically adorable, Who Is Dolphingod ? is a genuinely bizarre, challenging and intriguing piece of outsider art. For starters, Kaine’s voice is barely intelligible the entire tape—it’s caked in Auto-Tune, drenched in reverb, and sounds like it was recorded through a laptop microphone. (The sheer strangeness of a lot of Duwap Kaine’s early music is undeniably tied to his lack of recording equipment and studio space and having to produce and engineer himself. It isn’t the whole story but it’s a part, and works as an interesting parallel to the tech limitations of past generations of rap.)

And yet there’s this assertiveness to this record, in the way his P’s pop and his voice stays in the pocket: he is utterly confident in what he’s saying and we can barely understand a word of it. On paper it’s Back From The Dead done by a fourth grader, but in reality it comes off more as the feedback mess you might hear on a Skype call with your grandma. Occasionally lyrics will pop through the mix, usually made funnier by the fact that a 10-year-old is performing them: “Sippin’ on codeine!” he sings on the third track, before pivoting back to incomprehensible yelps.

An artist’s earliest music generally doubles as their Rosetta Stone of influences, and Kaine’s lineage is right in your face on this tape. “Stuntin” is basically a Lil B freestyle, the “Medicated” beat could’ve made it onto an old Wiz Khalifa tape, Chief Keef and Soulja Boy-isms are scattered throughout most of the beats and raps. But for how large these rappers loom, DolphinGod is still totally unhinged in this way that can’t be placed on a timeline. This is the work of a kid just having fun, doing absurd, non-commercial, for-himself shit with presets and a microphone. Did you ever save any voice recordings from when you were younger? That’s kind of what the last track reminds me of: DolphinGod absolutely tears up his karaoke of Trinidad James’s “All Gold Everything,” letting his voice dip deep into the red on, “Popped a molly I’m sweatin’, WOO!”

In that vein, the closest analogue may not be any rap album, but rather Philosophy of the World, the sole record by amateur rock band The Shaggs. Convinced by a palm reader that his children would form a successful band, in the mid-1960s Austin Wiggin Jr. pulled his three teenage daughters from school and forced them to make music. They practiced for a few years but remained largely untrained before cutting their first (and only) record in a day in a studio in Revere, MA. In formal terms, it’s a mess. The vocals are off-key, the drumming is arrhythmic, the music can feel like noise. But over the years, it’s gained a cult following. Frank Zappa and Kurt Cobain named it one of their favorite albums. Pitchfork gave the reissue Best New Music. Original pressings are dealt like high art. That noise is, it seems, music. Nothing sounds quite like it.

This isn’t to say that the Shaggs’ album is purely “intriguing” or “interesting,” or some innocent little trinket. There’s real trauma that undergirds Philosophy of the World. Their father was abusive, nothing about that band’s music and history should be taken lightly. Still, listening to this—and Who Is Dolphingod ?—is like watching a child paint: odd, funny, occasionally brilliant.

There are moments on Who Is Dolphingod ? that sound a little less like DolphinGod and a little more like Duwap Kaine. On “ATGOON,” a track where he repeatedly wails, “Auto-Tune goon,” he dips into the delirious burst-fire sing-rap that’s become his—and so many other rappers’—bread and butter. It’s the early stages of an artist who’s inspired some to begin making music and many more to approach rap in new ways. And as online rap pushes forward, and more osquinns and Sofaygos and Bktherulas creep onto the charts, Duwap Kaine will begin to loom large over pop music, and I wager that his catalog—including, probably, Who is Dolphingod ?—will be properly (re)considered by working critics.

Would I recommend this to anyone but the most devoted completists? No, probably not, but who knows: maybe it’s internet rap’s own Philosophy of the World.